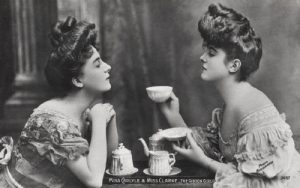 Our first Death Café in Marrickville was launched in spectacular style.  Hosted by Lazy Bones Lounge, by night a Jazz club but by day open for Death Café, we met as a group of strangers sitting together in overstuffed couches, dim lighting and eclectic décor all of which was perfect for our conversation.  It had taken some time to find the right location, but I knew when I had after I had spoken with Craig the owner about the possibility of holding a Death Café and he said to me, “what a great idea”.  And the rest is history.

I had woken at 4:00 am that morning to bake, which was a particularly daunting challenge as cooking, let alone baking, is not one of my strengths.  A few hours later I had somehow produced an iced carrot cake, polenta muffins, blueberry muffins and a Persian orange and almond cake all of which were enthusiastically tucked into by attendees.

Discussion was free-flowing, agenda-free and non-structured and simply revolved around the reasons for attending Death Café and what came up for people as they were listening to each person introduce themselves and why they decided to attend.  There was a rich diversity of cultures and religious and spiritual belief-systems present and there wasn’t a moment of silence throughout the entire time.  People spoke about their beliefs and their experiences of death which ranged from “I need to live a good life because when I die that’s it” to “I knew my mother was dying because she came to me in a dream and told me I had to come home”.

In general the feedback on the evaluation sheets was positive.  A random selection from the 3 words which best describe attendees experience of Death Café include; warm, relaxing, non-judgemental, inviting, comfortable, stimulating and inviting.  On a somewhat quirky note, one attendee arrived quite late due to having to attend a funeral … somehow it seemed rather fitting that cake was the order of the day.

Dr Michele Knight is a Social Scientist, researcher and independent scholar. Her interest and research in the end-of-life has its origin in the lived experiences of her own bereavements, the returning deceased and the attitudinal responses to those experiences. She has extensive involvement in community development, support and advocacy in both a professional and community services capacity. Since 2006 that involvement has encompassed the for-profit and the not-for-profit sector in the areas of Bereavement and Grief, Hospital Pastoral Care, and academic Lecturing/Tutoring. Her PhD, Ways of Being: The alchemy of bereavement and communique explores the lived experience of bereavement and unsought encounters with the returning deceased.