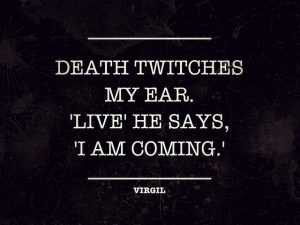 Bereavement seems to be a unique opportunity in that it provides a context for the disembodied to make contact with those still living a material existence, the embodied.  Such occurrences are spontaneous and have been found to occur without provocation from the bereaved; it is the deceased who initiate the contact. Such interactions do not result from premeditated behaviours such as for example visiting a medium, mirror gazing utilising a psychomantium (Moody, 1992, Family Reunions) or engaging in eye movement desensitization and reprocessing to induce communication (Shapiro, 2001, Eye movement desensitization and reprocessing).

Being a medium or possessing clairvoyant ability does not appear to be a prerequisite for after-death contact.  The literature reveals that a large number of accounts of after-death contact come from people who had had no prior experience with mediums, who themselves were not clairvoyant and who by their own admission were not particularly religious or spiritual, either in their thoughts or behaviours.

Some individuals experience just one phenomena, while others can experience a range of phenomena.  They can occur with immediacy after the death and/or with quick succession throughout the early months of bereavement.  Generally there is a tapering off over time, however they can occur spontaneously, again without provocation by the bereaved, many years after the death occurred.

Also, while these experiences are commonly reported by the bereaved, not all bereaved individuals do experience them.   Bereavement and social science research examining after-death contact has identified a number of typologies or characteristics which delineate these encounters, which can range from the feeling or sense that “one is somehow being watched” to a “fullblown sensory experience – olfactory, auditory, visual and occasionally tactile” (Bennett & Bennett, 2000, The presence of the dead).

The following is not an exhaustive list, rather it is an adapted schema drawn from the literature which identifies a number of elements of the phenomenon.

Visitation dreams:  Unforgettable, extraordinarily vivid or highly significant dreams, where the experient feels that the dream is more than a dream because they have directly interacted with the deceased.

Mental telepathy:  Communication from one mind to another which is heard in the mind of the experient and believed to be that of the deceased.

Auditory or voice experience:  The audible voice of the deceased is clearly heard either in close proximity or through a telephone call, a computer, or a mobile telephone.

Olfactory or sense of smell:  Scents either associated with or used by the deceased are smelt by the experient. These may include floral scents, pipe or cigarette smoke, perfumes and colognes or particular foods.

Unusual behaviour of birds or animals:  They appear unexpectedly in places or at times when never before seen and are associated in various ways with the deceased.

Symbolic experiences or synchronicities:  Rainbows presenting at unusual times, butterflies appearing repeatedly and staying with the bereaved, finding objects associated with the deceased or meaningful happenings believed to be directly associated with and/or attributed to the deceased.

Protective experiences:  These are happenings believed to protect the experient, or which prevent a tragedy or a suicide. The experient may receive a warning directly from the deceased regarding an impending tragedy or may receive support and encouragement when experiencing suicidal ideation.

Third-party experiences:  The bereaved receives a sign/message which comes through a third person, either a child or an adult who has the extraordinary experience.

Fourth-party experiences:  The bereaved receives a sign/message that comes through two other people, one highly intuitive.

Psi kappa experiences: Movement of objects (falling or flying through the air, moving from one place to another), a clock stops or starts at the moment of death, lights or other electronic equipment randomly switching on and off.